Midlothian, TX – Off-road venue TexPlex park in Midlothian, TX announces a major sponsorship with Cody and Hunter Miller of Miller Brothers Racing. TexPlex hosts an array of off-road racing events for amateurs and professionals. The Miller brothers are well known nationally among the UTV racing community and are affiliated with major industry names like Can-Am. Hunter and Cody took first and third place at TexPlex’s 2020 UTV race series. A series that is quickly becoming the biggest UTV racing series in the world. The TexPlex UTV race series draws racers from coast to coast and has gained attention among the nation’s top racers, such as Cody and Hunter Miller, and led to the partnership. Hunter stated, “From the moment we stepped foot onto the facility, we knew we wanted to be involved with TexPlex. We have raced all over the country, and we immediately saw the potential for a world class race series close to home. For the first time, we truly feel like we can help give back to the sport which we love and has provided us with opportunities most people only dream of.”

The Miller Brothers racing team began when Cody and Hunter were nine and ten years old. The brothers began racing motocross on ATVs and eventually became professional riders supported by factory Can-Am. In 2012 Cody and Hunter started their transition from ATV to UTV racing and in 2014 switched to racing UTVs full time. Since then the sibling team has gone on to win several major championships including GNCC, WORCS, UTV World Championship, King of Hammers, and the TexPlex UTV Championship. 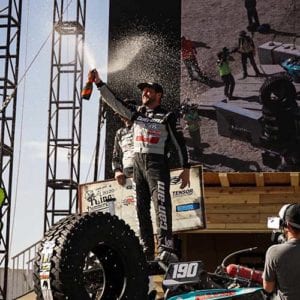 The sponsorship with Miller Brothers Racing will offer new opportunities for TexPlex, such as, name recognition as the Miller Brothers will represent TexPlex at other major UTV races they compete at throughout the country. In addition, TexPlex Park will also be able to offer clinics at the park for other racers to learn directly from Cody and Hunter. Gustin said of the partnership, “We’re super excited to be working with the best in the business when it comes to the SxS industry. Hunter and Cody are here to help us not only improve our racing efforts, but also spread our brand and bring awareness to TexPlex Park as we continue to grow rapidly. We hope you stop in and say hi to these guys as they race our 2021 season and as they travel the country racing. We want to grow this sport to a new level and we could not have better guys behind us helping us to do just that.”

Hunter spoke of the partnership by saying, “The entire vibe at TexPlex gets your heart pumping. To be an ambassador for the facility is unbelievably exciting. It’s like I am truly seeing the sport of UTV racing evolve in front of me. The course is extremely friendly to beginners, yet still challenging to the pros and I truly believe in the potential for the series they [TexPlex] are creating.”

For more information about TexPlex Park visit their website at www.texplexpark.com or 972-752-2223.

Scroll to Top
We are currently moving operations to Branson\ Hollister, Missouri!
We have 1500 acres of steep inclines, intense downhills, rock creek beds and Missouri wilderness! Our new main trail is a 3 hour trip and that does not include the extra loops or any off road rock climbing. There are new and awesome adventures at our new location just 6 miles south of Hollister, MO! Remember, with every closed door another opens, come join the excitement at Missouri’s newest off road park! It’s like nothing you’ve seen before! We will be opening Fox Creek off-road park By Tex plex on January 1st 2023.